The history of the J.P. Graziano Grocery Company began with a young Sicilian from the seaside town of Bagheria named Vincenzo Graziano. In the early 1900s Vincenzo left Bagheria and set out for America, as a stowaway, pursuing the girl he had fallen for.

Leaving his hiding spot in the engine room, Vincenzo unexpectedly met one of his uncles who is bound for New York. He learned from his uncle that the girl he desires was in fact already engaged. Crestfallen, Vincenzo decided to follow his uncle to New York and assist him when he opened his butcher shop.

The next stage of Vincenzo’s journey began with the untimely death of his uncle after which he moved to Chicago. It is unclear why he picked Chicago however, we know that like other Italian immigrants Vincenzo strongly identified with his place of birth (campanilismo). Getting word that many of his fellow villagers (paesani) were settling into a specific area would give him a big push in that direction.

As it turns out, a great many Sicilians from around Palermo and eastern Sicily were moving into Chicago’s Near North Side at this same time. Vincenzo’s home town was right outside Palermo and it stands to reason he was drawn to Chicago when he heard about this.

“Sicilians came in great numbers, especially in 1903-4, the tremendous Italian immigration year. The Irish and Swedish, more prosperous, moved out of the district and northward. And by 1910 Kilgubbin and Swede Town has become Little Sicily.”

Chicago: Metropolis of the Mid-Continent 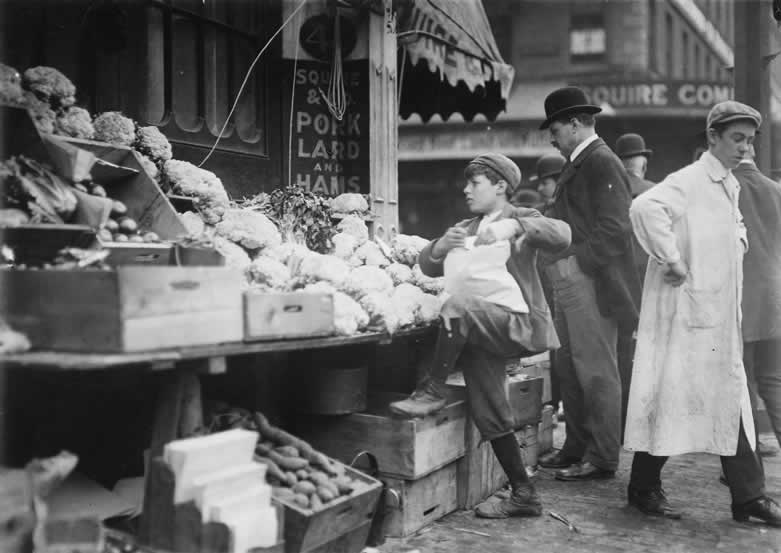 Vincenzo, with nothing in his pockets, experienced real hardship during his early days in Chicago.

He survived by lifting pieces of fruit from these street vendors, then going around the corner and selling them. Quick enough to not get caught and smart enough to save up enough to buy his own basket, Vincenzo eventually became a legitimate street vendor. Before too long he traded in his basket for a fruit cart.

The next step up for Vincenzo was a big one. He bought a horse and wagon and began traveling through neighborhoods selling produce.

Golden Age of the Street

Vincenzo’s, arrival in Chicago coincided with the so-called “Golden Age of the Street” when numerous street vendors and peddlers stationed themselves along the busy streets throughout the city.

When Vincenzo began navigating down Chicago’s street with his horse-drawn cart, he was far from alone. During this era housewives could buy ice, groceries, meat, get their knives and scissors sharpened without leaving the house.

“The specialties that developed in this economic street life mirrored the city’s ethnicity, with Italians dominating in produce sales, Greeks in confectioneries, Jews in recycling trades, Dutch in scavenging, and Germans in handyman services. ”

It’s safe to say that Vincenzo figured out the best routes to follow because he opened a brick and mortal grocery store in 1922. It’s also safe to say that as he rode through neighborhoods young Vincenzo had plenty of opportunities to see and meet young Italian girls.

In time, he became enamored with a particular girl, and according to the family story, he absconded her and drove to Wisconsin where they got married.

“I’m with Signore Vincenzo and we are married”, the newlywed girl matter-of-factly explained to her father over the phone.

Fortunately for Vincenzo, his now father-in-law didn’t hold grudges, because when the depression made Vincenzo close his grocery store his father-in-law gave him a job at his company, The Chicago Macaroni Company.